I got a phone call earlier this week. It was my neighbor Mark Gilbert. “I saw some pretty flowers…”

Thank you Mark. He replied, “It was rewarding.”

The Wildflower Walk was a bright idea one evening. Katie and I had met for dinner back in late December/early January to plan what we could do for suicide prevention this year.

We sketched out the calendar for 2018. We began with a training class in January and then the Wildflower Walk for April and the ASPARC annual conference in June. We ended the year with the Woodstock Music Festival in September and the Out of the Darkness Walk in November.

But by the end of March, I was in a panic. I didn’t think anyone would come. I wanted to cancel.

How do you invite people to talk and learn about a subject everyone wants to avoid?

And another big problem, I did not have a site to plant the seeds.

I remember telling my sweet sister-in-law Shea if it came down to it, I was going to plow up my yard.

We were camping at Tannehill State Park for Reagen’s birthday when all that changed. My first cousin Tammie has two daughters, Robbie and Kenlee. They were camping with us and called their Dad, Kenny, to bring them something.

Kenny brought it and stood by the fire to visit a minute. (Kenny also was the realtor when I sold and bought my houses.)

It never hurts to ask. “Kenny, do you know of any land near the highway I could plant some wildflowers?”

He replied, “I have that piece right across from you.”

As we say around here, “if it had been a snake, it would have bit me”. I can see that land out my kitchen window.

It sits at an angle from my house and is directly across the road from the old Woodstock Garden Center.

It is also easy to park and access. When Kelly Hicks and I planted seeds in spots last year around town, the highway made you nervous.

We wanted spots people could see, but I could not endanger a group of volunteers to plant these seeds.

I told Kenny about Lady Bird Johnson and S-Town and suicide prevention and our beloved seeds from everywhere. He agreed to let me plant them on the property.

My hope kicked back in. Invitations were printed and I began to plan this event.

Typical me, I wait until the week of the event to call anyone about the land.

He could not bush hog due to tractor problems, but he could plow it.

I called Sibley Equipment. Do you know anyone? (Sibley Equipment is owned by the family of sweet Mr. Hancock. I used to clean his house. Best boss I ever had.)

Shana said to try Wade Antonio and gave me his number. The phone call began with me leaving a voicemail rambling about really needing his help.

He called me back.

He had a death in the family of his wife, but he sent his Dad. 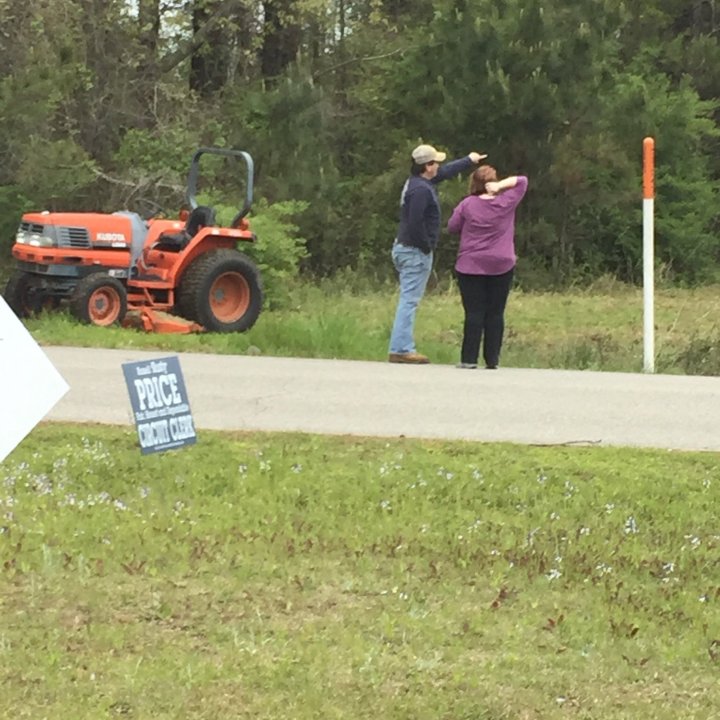 But it was done.

And they would not accept any money. They said it was for a good cause. I have never met them but I am forever grateful.

We get to the day before the event and we still have not plowed it because of rain.

I prepare to deliver an apology at the Wildflower Walk.

We are at the town hall setting up the food and the display.

Jeff comes up to me and lets me know Mark is plowing it up while we are speaking-literally.

Don Wilson is helping pick up around the site.

A huge sigh of relief. And a smile.

This is going to happen. 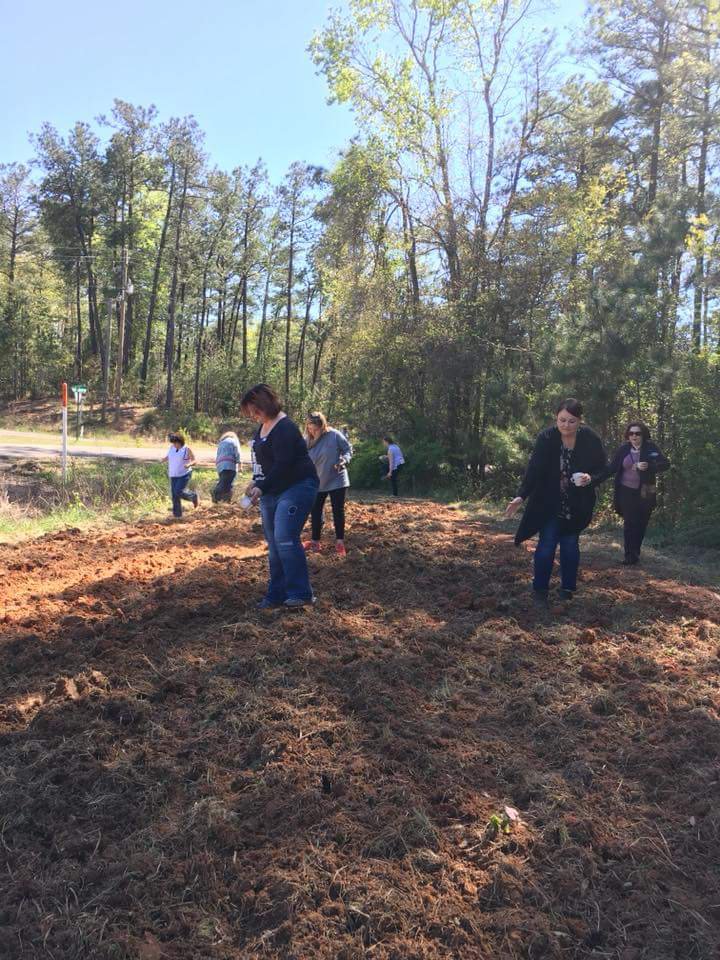 We scatter the seeds.

The next day someone spotted a flock of birds.

I feared they ate all of our seeds.

Each day I looked over there.

I was asked repeatedly, “Any flowers?”

And then one Sunday. I see something pink on the way to church. Jeff was quick to say, “You just about wrecked the car trying to look.”

I go back after church and walk through the tall roadside weeds.

I find that Hope does bloom.

Each day it seems there are a few more. Even a precious forget-me-not. 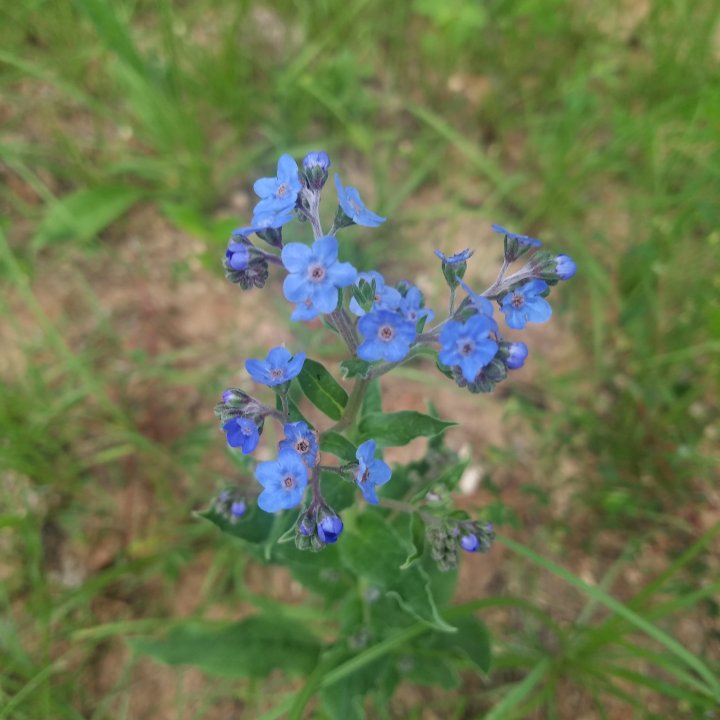 What I am trying to say is thank you.

There was no charge for the land, the bush hog, the plow, and the seeds.

I wish that the entire property was covered in blooms, but I am so proud of the ones that are there. 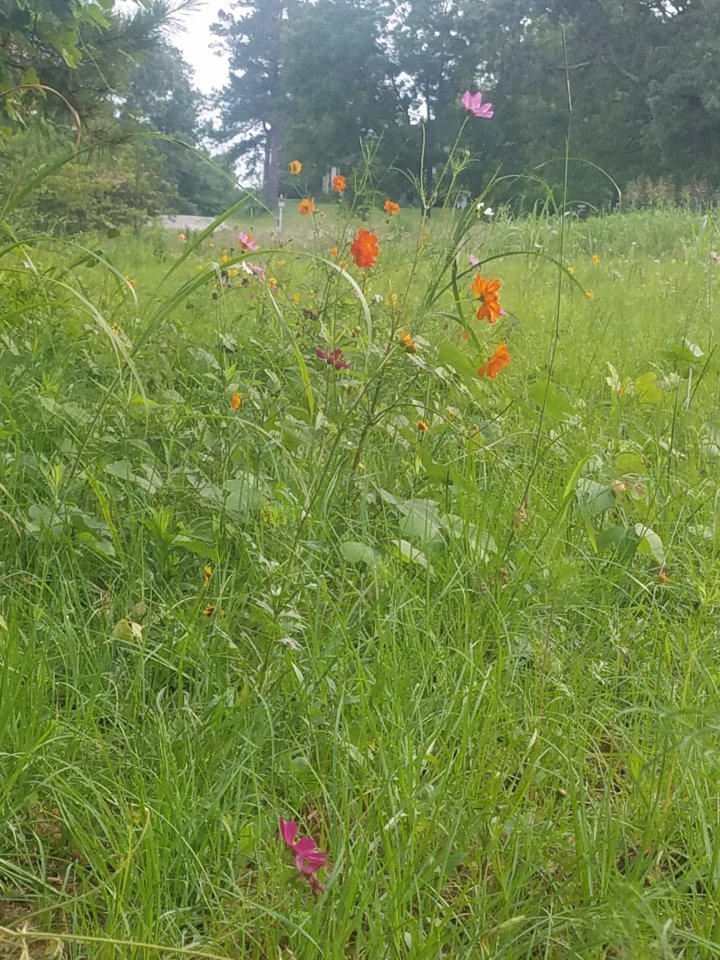 So, if I have learned anything, it is that you can’t tell wildflowers what to do.

I must be a wildflower. And I have a few friends…